Recently, I was lucky enough to spend a week in Paris to see the World Chocolate Masters Competition. I’ve been to Paris and to France many times over my life and career, although this was the first time in a while I got to do so without anything work related overshadowing the experience. Even better, I was with a group of incredible pastry chefs (none of whom I had previously met, and all of whom I now consider amazing friends) that made the trip all the more enjoyable.

As a pastry chef, I was originally trained in classical French technique. That alone has given me a deep connection to France and its culinary culture. More than just that, though, is the fact that before I was born my parents lived in Paris, and that meant French was spoken in my household growing up (though never directly to my brother and I). My parents didn’t teach us the language; my Mom once told me it was so they could discuss the two of us (read: discipline) without us being any the wiser. France and its culture, in short, has been a familiar theme to me. 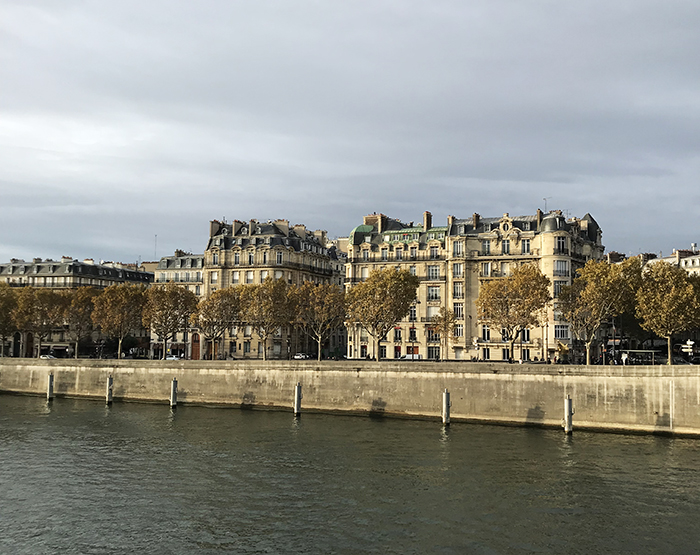 The Seine river in Paris. 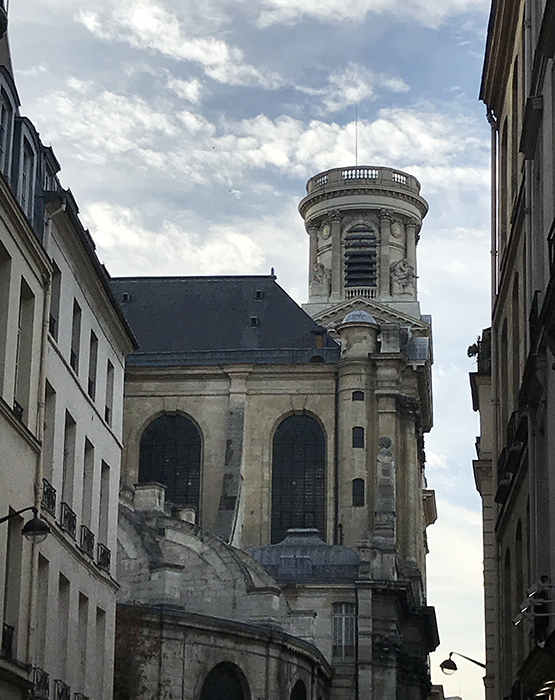 My first time in the country, I was barely old enough to appreciate it. As a professional chef and an adult, though, going to France took on a whole new meaning. The country has an undeniable allure, and of course is fused into arguably every modern cuisine on the planet. As a chef, the connection is something I’ve always felt, for better or worse, and thought about often. This trip has encouraged me to explain why I feel every culinarian should visit the country at least once.

Before I get into what I really love about France, I want to dispel a myth. For those that haven’t been, there’s a notion that the restaurants and chefs as a whole are of a higher caliber than what we can find in the states. False. The truth is there are crappy restaurants and crappy chefs in France, and they’re every bit as bad as the crappy ones we have here. In fact, the worst pizza I’ve ever had IN MY LIFE, I had in Paris. Of course, there are amazing chefs and restaurants in France, but in my humble opinion they aren’t of a caliber higher than the best of what the U.S. has to offer (I know I’m opening myself up to much dissenting commentary. Bring it on!). 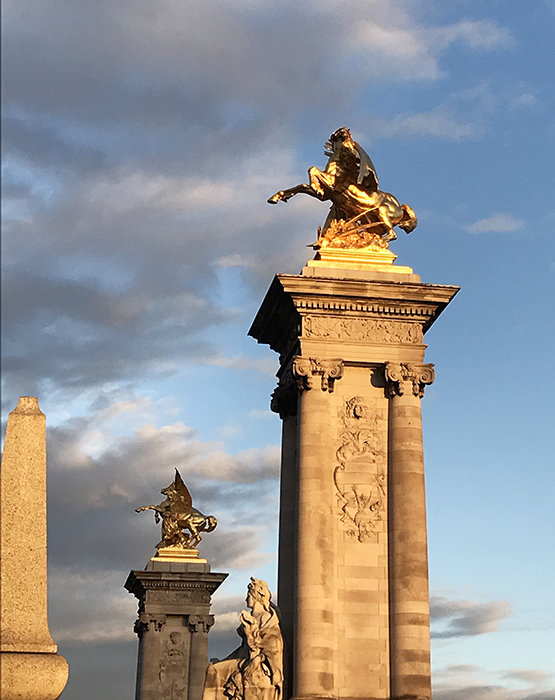 The golden hour in Paris. 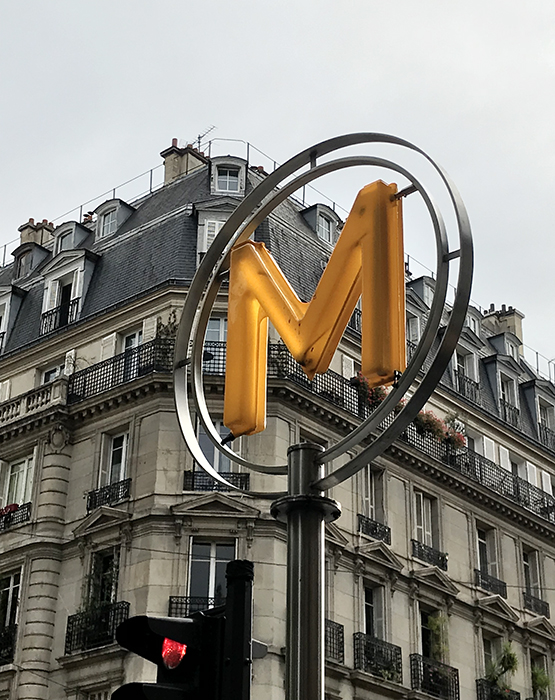 Ok, so if France has good restaurants and bad restaurants and they’re on par with the good and the bad we have here, why go? Because it isn’t what the French do with food that makes it such a wonderful place to visit, it’s how deeply the culture loves and supports food and eating itself.

Take day-to-day grocery shopping for example. The French (and many Europeans) shop for the meal they’re having tonight, not stocking up in bulk for the week or the month ahead. By “shopping for the meal they’re having tonight” I mean the meal they’re going to cook from scratch. More often than not, they aren’t going to Le Stop and Shop for those ingredients. Yes, supermarkets exist, but the concept isn’t nearly as ubiquitous of a shopping option as it is here. They go to a fishmonger for their fish, and a boulangerie for the loaf of bread they’ll have with it. To shop and cook like that takes time, and effort, and patience, the kind of attributes that are evidence of care. It also allows an industry of specialized artisans to thrive, and that in turn creates apprenticeships to keep the cycle going. One shockingly clear thing the French have a leg up on us with is artisan tradecraft. 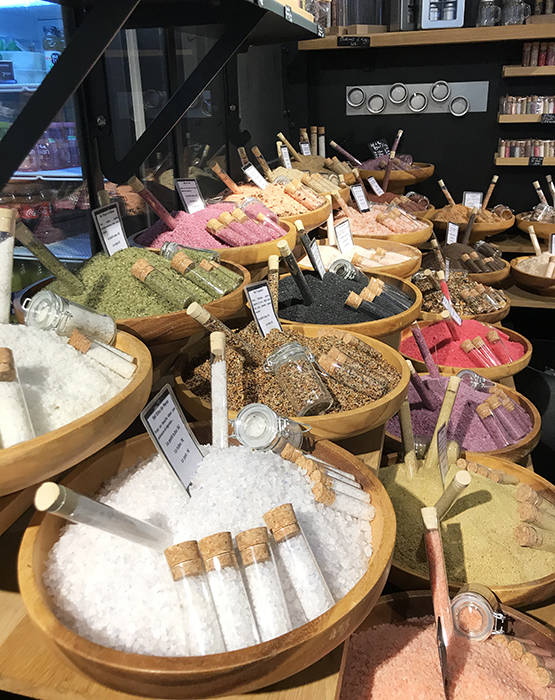 A world of salts a Les Halles in Paris. 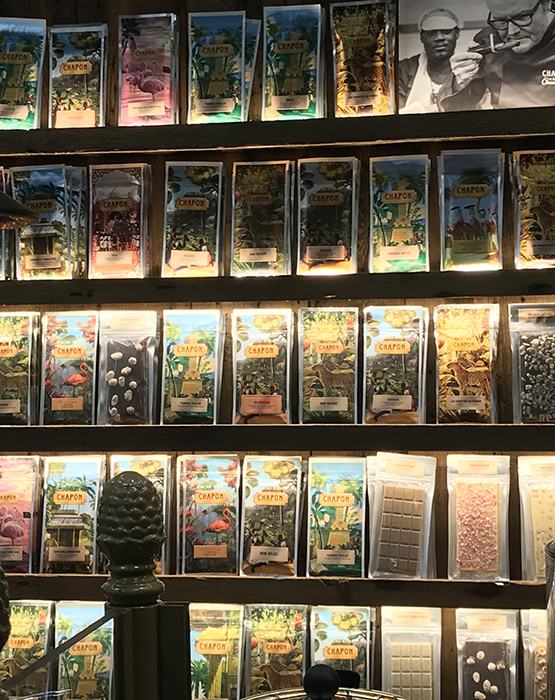 A few years ago I spent the better part of a month in Lyon, and over that time I got to know the neighborhood near the kitchen I was working in. Walking down the street you’d come across a pastry shop, a butcher, a boulangerie, etc. all on the same block. Then, a little down the road, you’d see the same thing. Then again, and again, every few blocks. Soak that in for a minute. In a half mile you may have 6 or 7 different pastry shops, different butchers, different cheese shops, all making a living. Imagine that type of saturation in any town in the U.S. It would never work. But in France, all of those shops survive, because they service the people in just the block or two around them, and because the people around them travel just a block or two for all of the food they need. I love it!

If we had the availability and quality of ingredients you can find in France, then maybe more Americans would shop and cook in similar fashion. The produce in France is in a word, phenomenal. I will readily admit that basically all French ingredients are of a higher quality than just about anything you can get here, and almost always at a fraction of the price. It’s not because there’s something magical in French soil (don’t tell them that), it’s simply that the culture supports everything it takes to make top-notch product and once again keep artisan craft in business. 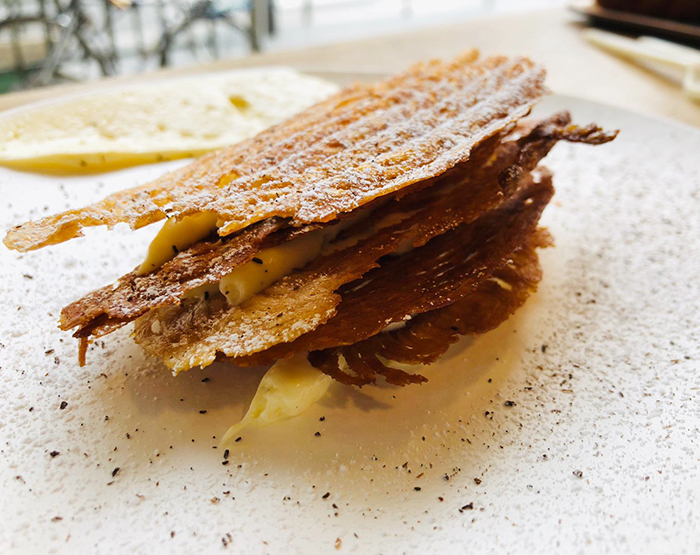 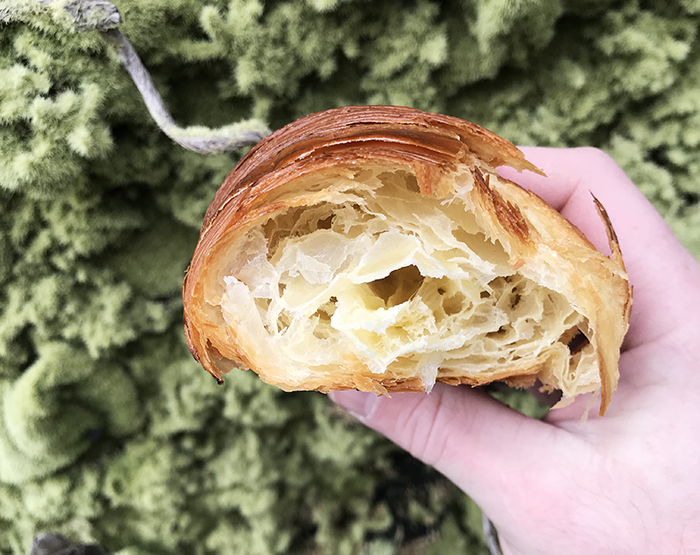 Despite what I said earlier, France is still a country filled with incredible restaurants. In my recent trip to Paris I had one of the top five meals of my life at a simple, unassuming restaurant in Montmarte called Gare au Gorille. Every dish was absolutely perfect, and I can say that after having literally everything on the menu. The meal was served without pretense out of a kitchen the size of a closet. Flavors were focused and balanced, and executed precisely. Highlights included a country terrine with plum compote, lamb served with an incredible mushroom fume that was as delicate as it was complex, and poached bonito with crispy boudin noir – a dish I will never forget. 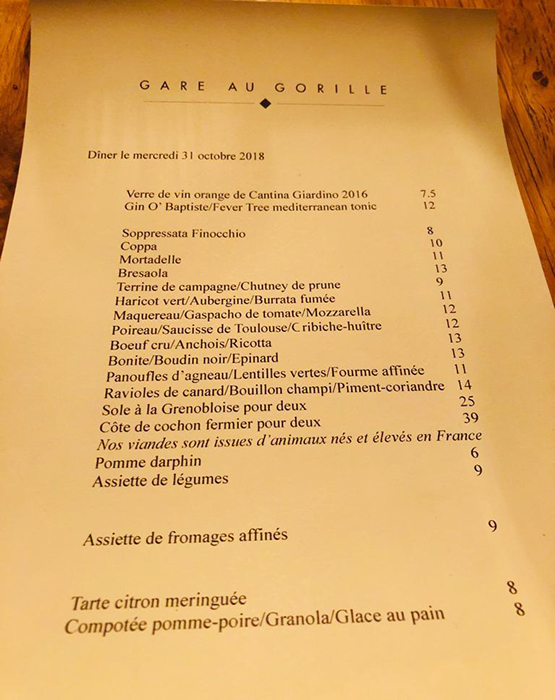 A guide to dining perfection.

A day or two later I had a stellar lunch at L’Avant Comptoir. Standing at the bar that runs the length of the tiny restaurant ( at barely 300sq. ft. it’s standing room only), you order from a wide ranging menu that hangs from the ceiling. Tapas style dishes like charcuterie sliced a la minute, grilled duck heart, and cheese croquettes won me over, not to mention a communal, self-serve boulder of butter so good you could (and I did) eat it on its own. All served out of a kitchen the size of half a closet by a single, infinitely badass cook. I could have stood there all day, casually eating and drinking glasses of bordeaux and gamay, watching the two man crew expertly serve a neighborhood crowd. As a lover of gastronomy, it was heaven. Meals like that can come from seemingly everywhere in France. A restaurant without James Beard awards, or a TV show, or a “celebrity chef” will give you the best meal of your life. 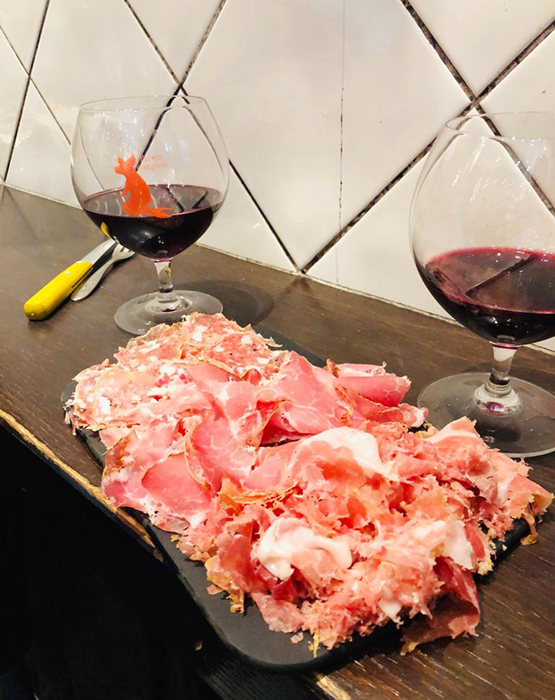 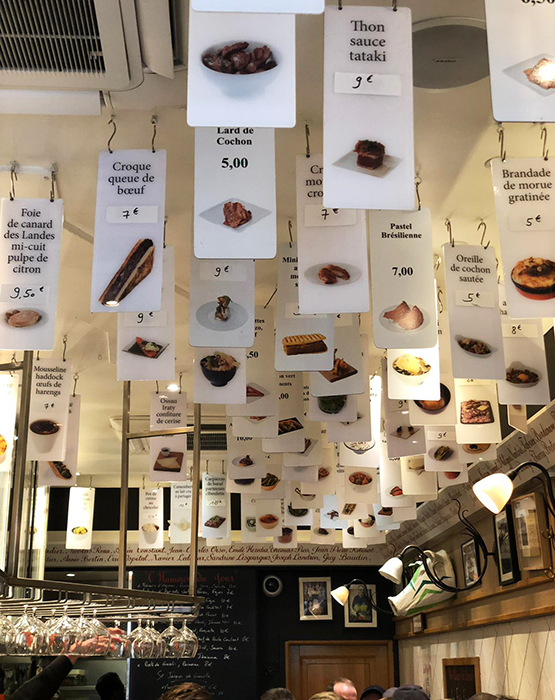 The menu at L’Avant Comptoir. One of everything, please.

For pastry chefs, Paris is a wonderland. It’s mind blowing how many incredible patisseries, boulangeries and chocolateries there are. Not to mention casual kitchen supply shops like Mora with more tart rings than you can shake a stick at. Experiencing the shops, the displays and packaging, the care and pride the employees have in serving the product, is all incredibly inspiring. Yes, yes, the pastries themselves are great – and maybe it’s just me – but the world surrounding the food is often more energizing than the food itself. For those looking for some recommendations, my top picks are Yann Couvreur, Des Gateaux et du Pain, L’Eclaire de Genie and La Chocolaterie Jacques Genin. If you have top picks of your own to share with the DFK community, leave them in the comments! 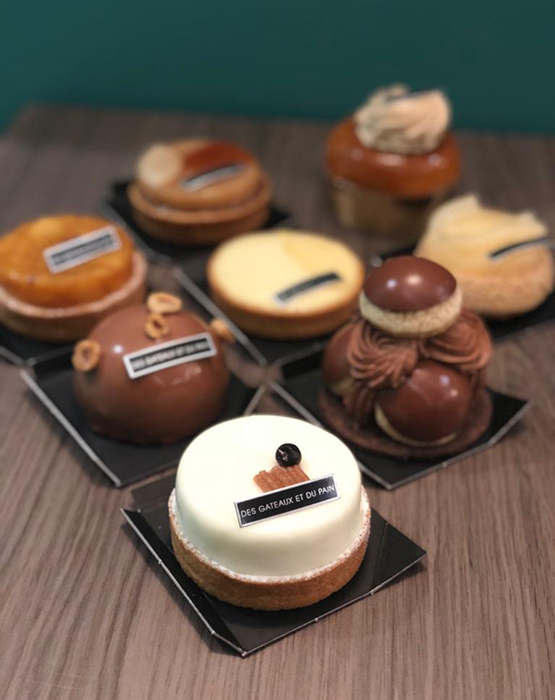 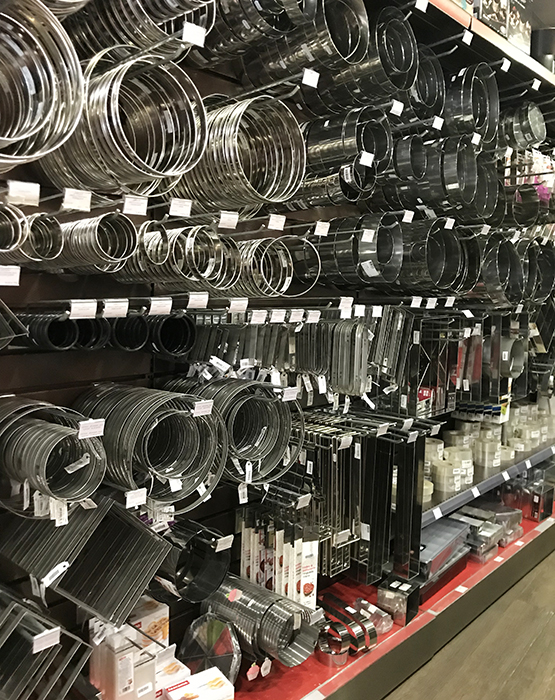 The wall of rings at Mora. 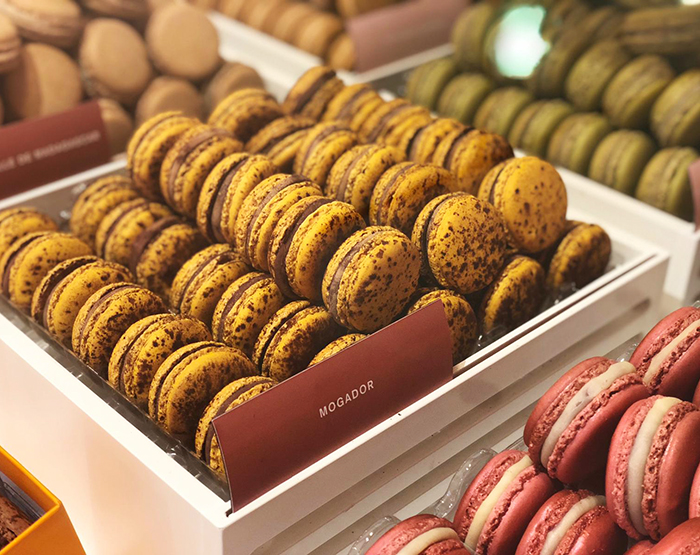 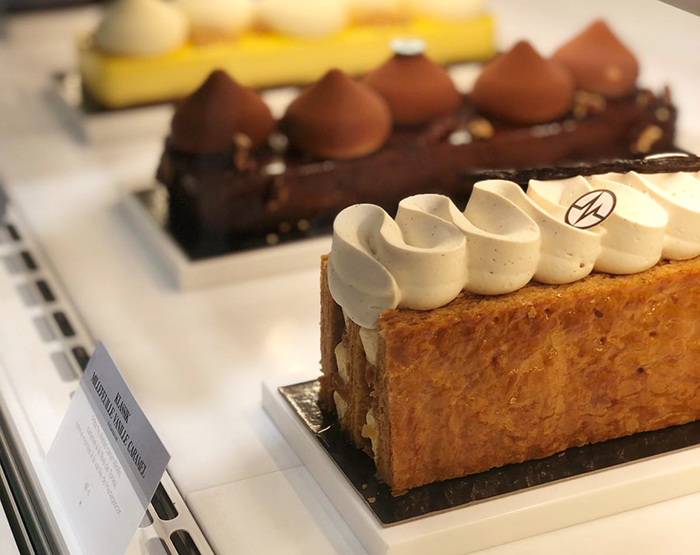 The pastry of Christophe Michalak.

It’s hard to express how infectious the culinary passion of France is, and how inspiring it can be in the simplest of ways. To go to France is to be surrounded by a nation of people that love and appreciate food, and ingredients, and dining, and eating just as much as you do. That fact alone makes it well worth the trip.